In July of 2015, the New Horizons spacecraft will arrive in the vicinity of Pluto. It will make the first flyby of Pluto, the last of the classic nine planets of the Solar System to be visited by a spacecraft. Below is an artist’s impression of the unmanned craft.

Until 1962, all eight planets had only been viewed through earth-based telescopes. With the dawn of the space age, unmanned probes were dispatched to those distant worlds; gradually they gave up their secrets, and Pluto will be the final one. 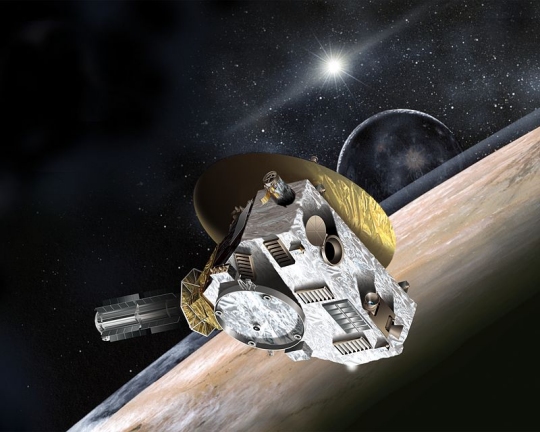 In December of 1962, the American Mariner 2 spacecraft made a flyby of Earth’s closest neighbour, Venus. The cloud-covered planet was further visited by several U.S. and Soviet craft, including a short-lived landing craft in 1967. The harsh surface conditions (a runaway “greenhouse” effect) presents a challenge to any lander.

Mars has in recent years received several American landers and rovers, but its first successful visitor was the Mariner 4 spacecraft in July 1965. The crude images returned showed none of the famous “canals” that had been mistakenly observed from Earth (an optical illusion) but more significantly showed a cratered surface not unlike the Moon. Later craft showed apparent river channels and other features from early Martian history that suggested the former presence of water, and a possibility of past or even present Martian life.

In December of that year, a spacecraft from Earth, the American Pioneer 10, made a flyby of the largest planet in the Solar System, Jupiter. Pioneer 10 was aptly named, and paved the way for the heavier and more famous Voyager spacecraft, launched in 1977, both of which visited the planet.

The Jovian system has since been visited by more spacecraft, including the Galileo craft which went into orbit around the planet. It was thus able to witness the demise of the Comet Shoemaker–Levy 9 as it crashed into the planet in 1994, and was able to launch the first probe into the atmosphere of the gas giant.

The use of the gravity assist technique to increase the speed of a spacecraft as it travels to more distant worlds,has ensured that Jupiter has received several passing visitors.

The closest planet to the Sun, Mercury, was first visited by yet another U.S. spacecraft in the Mariner series, number 10. Once again, it revealed a cratered world.

The old notion that one, similar to the Moon, Mercury kept one face pointing at its parent, is not the case (which spoiled a few science fiction stories).

In September 1979, two years after the Voyager craft had been launched, the earlier Pioneer 11 spacecraft flew past Saturn, the ringed planet, returning the first close-up images of this beautiful world. The craft had earlier visited Jupiter along with its sister Pioneer 10. 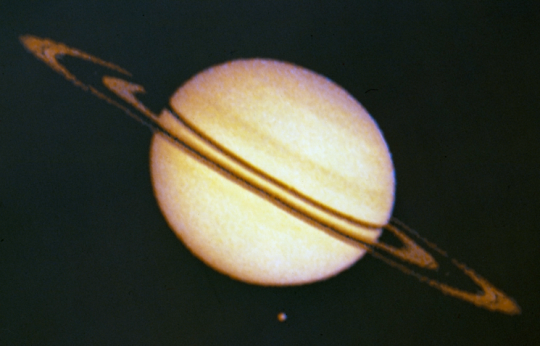 Since 1979, the Saturnian system has been visited by several craft, the Voyager probes and the Cassini spacecraft which landed a probe on the largest moon, Titan.

In January 1986, the Voyager 2 probe became the first, and so far only, probe to fly by the seventh planet. The triumph of this feat of unmanned engineering, after a 9 year voyage, was to be marred a couple of days later by the Challenger accident.

The Voyager 2 probe’s final planetary encounter (though it is still working as of 2015) was with the blue gas giant, Neptune, in 1989. The eighth planet has yet to receive any further visitors.

Pluto was “demoted” from the club of planets in 2006; it is now a minor planet, along with the larger dwarf planet Eris, and others.

If all goes to plan, in July, humans will finally be able to view this most distant rocky world and its largest moon, Charon.

The digital images, broadcast back to Earth at the speed of light, will take over four hours to make the journey; compare that with the second and a bit that it takes a light from the Moon to reach us, and the 8 minutes that is required for light from the Sun to reach us.